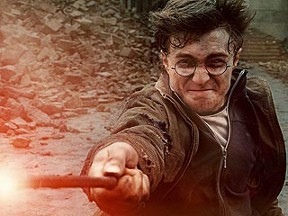 All seven previous films in the Harry Potter series faithfully executed the magical minutiae of J.K. Rowling’s books. Harry Potter and the Deathly Hallows-Part 2 is the first to re-create the feeling of reading them. Grim, beautiful and unabashedly emotional, this is nearly as satisfying an end to the saga as a fan could wish for (even with some subtle deviations from the book) as Harry (Daniel Radcliffe) faces the evil Voldemort (Ralph Fiennes). On their quest to find and destroy the Dark Lord, Harry, Ron (Rupert Grint) and Hermione (Emma Watson) take a thrilling detour through Gringotts’s bank vaults (the best use of otherwise needless 3-D) before finding their way back to Hogwarts. The wizarding school is a garrison, and it’s here that the mighty battle will come. Bring tissues, because Hallows 2 is largely about facing death. Beloved characters will die-including possibly Harry. When the time comes to face Harry’s fate, Radcliffe confidently, casually shows how much he’s matured as an actor. He’s a man now, and flashbacks of him, Grint and Watson as wee tots in the first film underscore one of Hallows 2’s salient metaphors, about childhood’s end. But despair not, Potterphiles. That part you’re fervently hoping to see at the end? Wish granted.

One comment on “Harry Potter and the Deathly Hallows Pt. 2-MOVIE REVIEW”